I’ve had set up in my gaming room for awhile now my 1/72nd(20mm) Punic wars armies ready to re-fight the Battle of the Trebia a battle from the second Punic Wars 218BC  between Hannibal’s Carthage force and a Republician Roman force commanded by Tiberius Sempronius Longus. 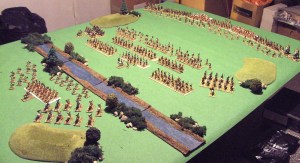 I add some Gaul/Celt units to bulk out the forces,in the above picture we see the main Carthage force at the top right,in the centre is the Romans and to the bottom left is the Carthage ambushing force.

The game begins with the Carthage force closing the trap, the Romans advance there front line while the Gauls are sent to take on the ambushing force.

Oh yeah before i forget we also added a few extra rules to fit in the real battle,first off all Roman troops including allies got -1 Combat ablity due to fatigue(crossing the freezing river) plus Carthage got the first turn.

The first combat is joined with the skirmishers clashing while the Elephants chase of the Allied Italian Cavalry.

Things carry on going badly for the Romans with there right flank crumbling complete,with multiple units destoyed or routing.To the rear the first unit of Gauls are seen off by the African Veterans. 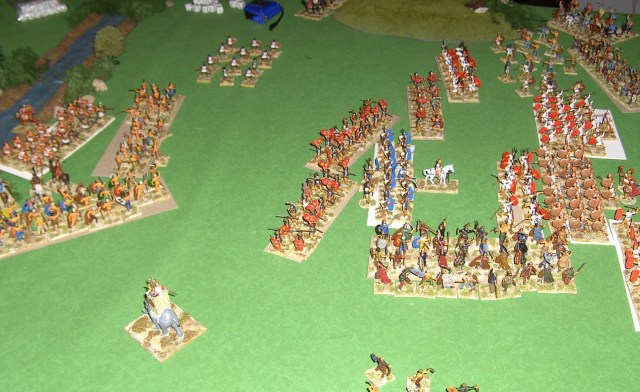 The end seems near for the Roman forces with most of it ever destroyed or fleeing,the only units to stand there ground are the second unit of Gauls and the Roman Elite Triarii.

Time was getting on so we decided to play one final turn and agreed if the Roman Triarii could hold the morale victory would go to the Romans.It was a close one with the Romans needing to role a 5 or under to hold with no extra dice left to boost there chance.The bones were cast and came up a 5,3 & 1 which ment a Victory to Roman nice one Dave :). 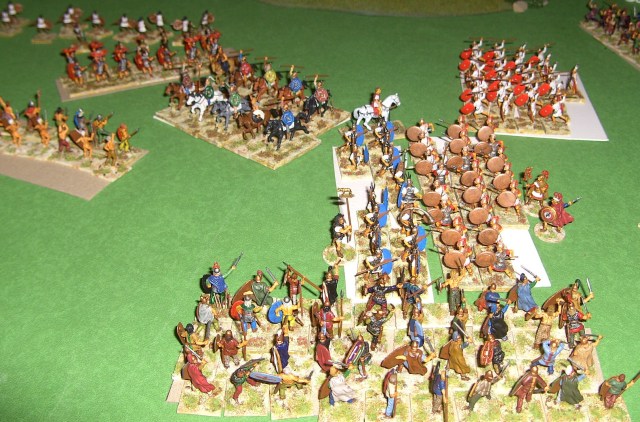 It was a really fun evening and great to get all my painted Punic wars stuff on the table.

Thats it for now,Laters STEVE.

This entry was posted in WAC, Wargaming. Bookmark the permalink.