Posted on December 8, 2014 by lurkusspleen

Well I must say I’m really getting back into War & Conquest at the moment, with my EIR and Celts taking front stage. Managed to get a few games in including a game last night at club against Mike and his Macedonians, we were using 2,000pts force.
Here’s some pictures.
Mikes Macedonians.

We had rolled up Spring deployment (table quarters) and 10 turns of play (fixed length), Battle objectives were drawn in secret with me getting Search & Destroy (eliminating enemies 2 most valuable formations) while Mike got Breakthrough (get 25% of your formations off the table within 6″ of enemies Rally point).

Battle lines advance towards each other.

One of the Macedonian Phalanx breaks one of my Recruit Legions which contained my General and army standard and then ran them down…..ouch.

But with my cavalry getting into one flank while my two heavily armoured regular Legions attacking from the front I managed to destroy the other two Phalanx’s…hurrah.

With this the game was over with my Romans taken the win, it was a cracking game and as always Mike is a great opponent.

My new Celt Javelin men get stuck in. 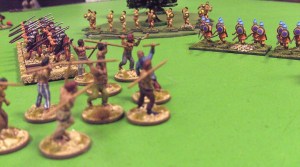 Close up of one of Mikes old school plastic Phalanx units.

This entry was posted in Celts, EIR, WAC, Wargaming. Bookmark the permalink.