Its been awhile since I’ve played Black Powder but what with the big Waterloo game on the horizon I jumped at the chance when Mike offered his Austrians up for battle.
Mikes would be fielding 2 mixed Infantry Brigades each with 5 Battalions(1 Guard,1 militia,3 Line)plus 1 large mixed Battalion containing heavy cavalry Regiments back up with 3 infantry Battalions, I would have to break 2 of these to break Mikes force.
My force consisted of 3 Infantry Brigades each of 4 Line Battalions plus 2 Light Cavalry Brigades each of 2 Regiments, Mike would have to break 3 of these to force me to retire.
We set the table up with a ridge (3 hills) in the centre of the table we decided that the player who held the most of these by the end of the game, 10 turns would be the victor unless either side broke before.

Mike got first turn but his lads didn’t seem to want to move much, while when I got my turn most of my forces behaved and I managed to push 2 of my Brigades right forward.

The some of the Austrian Cuirassiers move forward to take one of the objectives. 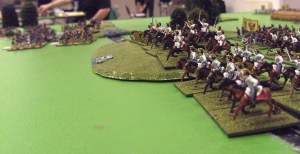 While another Regiment moves ready to engage one of my line battalions but are sent packing after a volley of musket fire.

…….and then engaging some infantry Battalions in the woods.

Here’s a view of my attack going in.

I managed to destroy the artillery but the rest of the attack failed.

With this the Austrians went on the attack and they pushed back the French forces but only to the ridge line, were they were held.

The game was over and the French were victorious having broken the Austrian army. 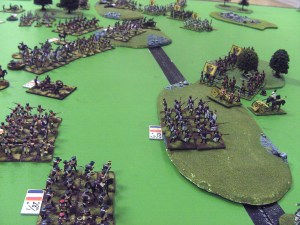 What I absolutely awesome game, it was so close at the end and could have gone ever way, a big thanks to Mike for being such a great opponent here’s hoping we cross swords again sometime soon and thanks for the extra pictures i’ll put them up later in the week.

This entry was posted in Black Powder, Napoleonic's, Wargaming. Bookmark the permalink.

1 Response to Battle for the Ridge, Napoleonic Black Powder.