Me and Dave played the latest part of the campaign last week,this saw my Abyssal Dwarfs attacking through a pass blocked by a small Dwarven force. 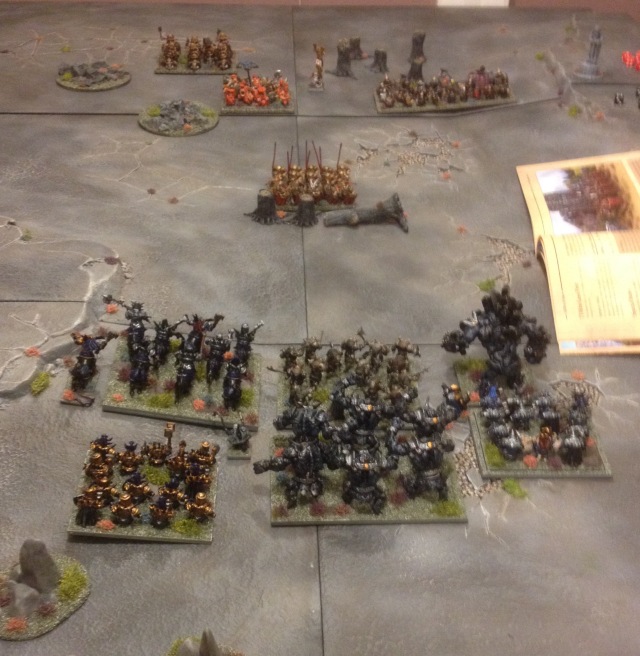 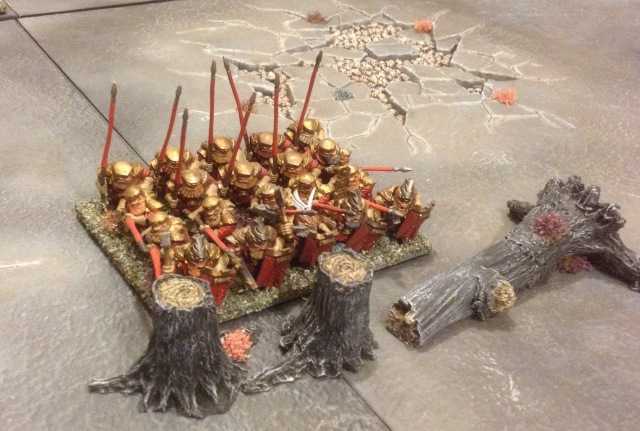 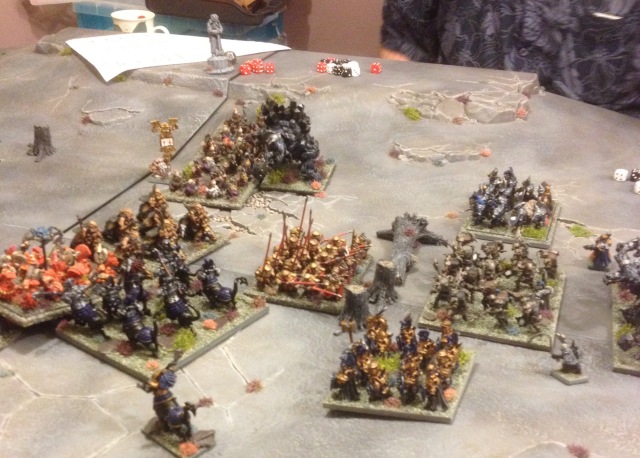 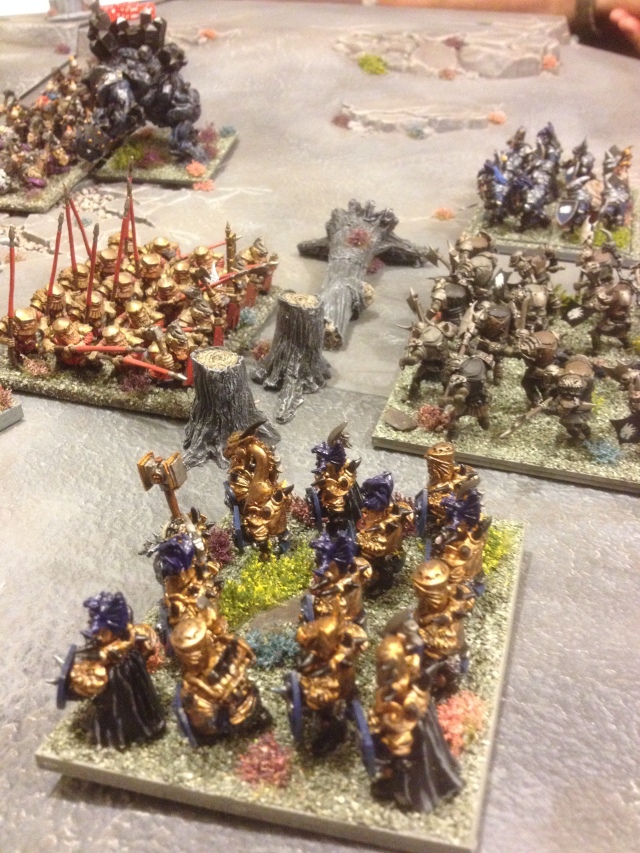 Both lots of Elite warriors.

Its all over for the Dwarfs,the game ends in turn 5 so a win for the Evil stunties.

Another clacking little game,really enjoying this campaign,looking forward to the next gsme already.

As i said in my last post i’d be doing a few different things to take a break from my Basileans. First up i’ve sorted out a couple of Fire Giants for my Ogre army,these are both Reaper bones models.

Time for a change.

Now i’ve been putting together my Basilean army for awhile now and now have more than 2,000pts painted and ready to use with what i’ve just finished.Here’s some pictures.

And finally another unit of Men-at-Arms with crossbows, i used Frostgrave arms to make these up. 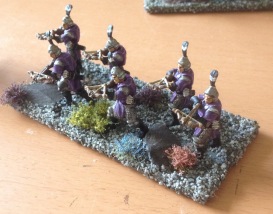 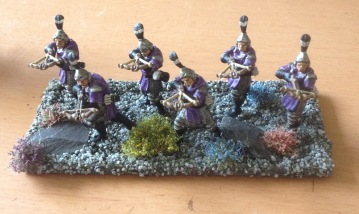 With this done i’ve decided to take a break from these guys and revisit some of my other KOW armies as i’ve picked up quite a few new bits for them,so watch this space :0).

Had a cracking KOW game this Sunday at club,it was against Ken and his Undead army.Now Ken hasn’t played for about 6 months so was a bit rusty but the great thing about the game is its easy to get back into the swing of it as the rules are so clean.

Anyway we roled up the loot scenario and were using 2,000pts,i was trying out my Basilean again with a few minor tweaks. As i said it was a great game and went right down to wire with us both holding a loot counter at the end of turn 6,we rolled for turn 7 but didn’t get it so the game ended a draw.

I only took a few pictures which is a shame really as Kens army is cool and is made up of Mantic only force.Here you go.

Well its been a while but real life has got in the way of my blogging ;o).Anyway Kings of War is still my main focus when it comes to painting and gaming,i have continued to work on my Basileans.
Here’s some pictures of what i’ve added to my army.
A Horde of Paladin Knights including some Wolfhound wardogs.

3 heavy Arbalest,made from Warbases Roman Bolt Throwers with converted Paladins and men at arms as crew.

And finally a War-Wizard,as you can see i’ve used one of the GW LOTR’s Gandalf models. 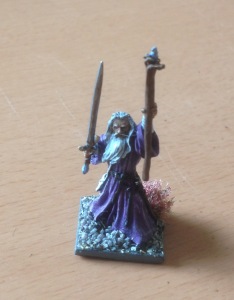 Well there you go thats over 2,000pts painted and i’ve even played and won my first game with them.
Any way thats it for now.
Cheers,Steve.

Cracking on with this army now as i’ve decided to use it for the up and coming KOW league l’m running at club in March.

I’ve managed to complete two more units,a troop of crossbow men and a Phoenix,again sorry about the quality of the pictures.

For Christmas i was lucky enough to get a new KOW army from my darling Wife :o). That army was the Basileans which is a good alliance human army with a few added beasties.

I’ve managed to put together and paint up a couple of units and characters,here’s some pictures  (sorry there not the best).

Men at arms horde with spears. 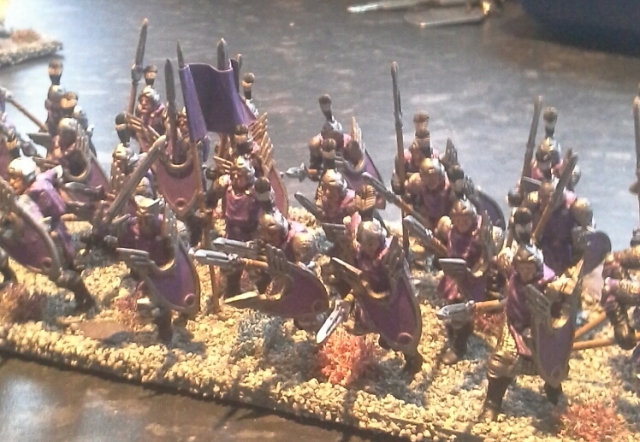 High Paladin, this is a reaper bones model.

A horde of Elohi. 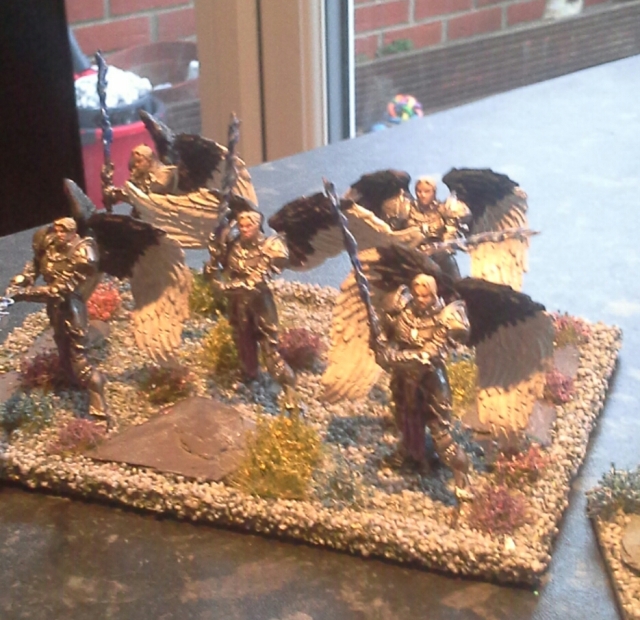 So that gives me about 750pts finished,really happy with look of this force so far, shouldn’t be long before i can get them on the table.

Managed to paint up a couple of new beasties for my Varangur army which I was lucky enough to get for Christmas.Both models are from the Reaper Bones range.

Posted on January 6, 2017 by lurkusspleen

Just after Christmas me and Dave played the next part of the campaign The Nameless Cave scenario.Armies were 750pts a side plus we got to use are special characters for the first time.The game was a kill and pillage scenario  with the cave being the objective.

End game and a victory for my evil stunties.

Another cracking game in this campaign,really looking to the next game.

Posted on January 1, 2017 by lurkusspleen

So how did I do on the project front,well I didn’t buy any models myself but I did receive a few as presents.

re basing my Vikings & ECW armies as well as doing my mates ECW and Dwarf army.

Painted up my KOW Abyssals Dwarfs plus did a Varangur army and a few Ogres.

Finished both my 15mm WW2 army and my WW2 fleet plus the last few bits of my 28mm Russian force.

Started on my Dark Ages Welsh Army, got enough to run a 6 point SAGA force but not big enough to play WAC yet.

Finished my Roman’s and Celt armies for WAC and my 1/72nd Napoleonic’s for Black Powder.

And finally finished my Early War WW1 BEF army and got have way through my Late War force.

I’m really happy with how I’ve done.I’ve also took this opportunity to clear out a lot of unused/want stuff which I’ve had for ages and haven’t used.

As for 2017, More KOW as I have a few more bits for my existening armies plus a new Basilean army to put together and paint plus I’m just getting in to XWing so would like to get some more of that played.

Anyway that’s it for now, I hope you all have I great New Year.